Every day, we discover new ways spectral CT could be used to better the lives of our colleagues and patients. With the most recent version of our laboratory scanner (pictured right), you will be able to simultaneously measure up to 8 energies at very high spatial resolution (50-200 µm) and with low noise.

This technology enables identification and quantification of various components of soft tissues, bones, cartilage, and exogenously administered contrast agents and pharmaceuticals in a single scan (up to six different materials simultaneously).

Our preclinical system is directly translatable to clinical human imaging as the same software, hardware, and visualization tools are used. Learn more about human imaging with MARS – MARS for clinicians 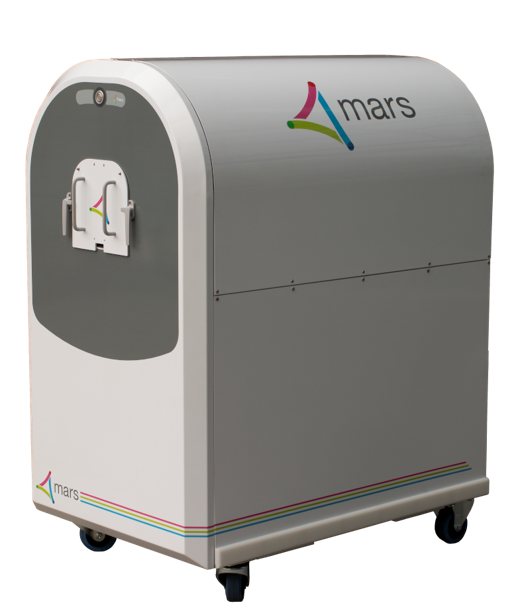 Each MARS Microlab 5X120 is equipped with:

By using the energy information captured by a Medipix3RX detector chip, MARS spectral CT delivers the next generation of CT imaging, with identification and quantification of both intrinsic and extrinsic materials, from low contrast materials such as lipid and water to high contrast, including calcium, gadolinium and iodine.

Until now traditional CT offered poor differentiation of low contrast soft tissue, but with material quantification, MARS spectral CT delivers assessment of the lipid/water composition of soft tissue, with benefits to research in the areas of fatty liver disease, atherosclerosis, obesity and more. Spectral curves are used for CT “fingerprints” of tissues in question.

As all the information is contained within the energy of the photon, and the distribution of photons, a high dose is not necessary to achieve a high quality image. The need for repeated scans is reduced. This also benefits researchers who are planning to do longitudinal studies, as repeating scanning at low dose of the same subject is possible.

The nature of spectral CT, and the use of photon counting and charge summing mode means that metal artefacts such as beam hardening can be removed during the reconstruction and material decomposition process.

MARS Microlab 5X120 is designed for a wide range of applications, hence users are given the flexibility to design or adapt protocols to optimize their scans for their needs and specific applications. This includes the ability to change energy window width, voxel size, source to detector distance and more.

All MARS scanners come with its own proprietary reconstruction algorithm, but users are also able to access all raw data. This offers flexibility to users to apply their own image processing and reconstruction techniques if they wish.

What is spectral CT?

The introduction of computed tomography has contributed to major advances in medical imaging research and diagnosis. CT imaging has taken plain x-ray radiographs from 2D flat images to 3D images. In 2D imaging 3D objects appear flattened – the image from objects in the front overlap with those in the back. CT on the other hand takes a series of images around a sample, which are then processed by a computer to produce slices through the sample. This 3D view shows the structure more clearly and also shows objects inside others. This 3D view shows the imaged structures more clearly, it also illustrates the relationship between adjoining structures, distinguishing between objects that are beside each other or within each other. Colour CT has the potential to be as revolutionary to medical imaging as the move from 2D images to 3D. The addition of a colour spectrum to the spatial resolution provided by traditional 3D CT contributes significantly more information; with colour CT it is now possible to determine what an object is made of.

Photography provides a good analogy when considering the impact of moving from black and white images to colour. Black and white cameras detected how much white light (all wavelengths of visible light) is being absorbed or reflected by objects. However they do not distinguish what is happening to the different wavelengths within this light. Colour photography measures three different wavelengths – red, yellow and blue. These wavelengths are reflected or absorbed off objects in view, and the camera is able to record this. The mix of reflection of red, blue and yellow gives objects their colour. The image to the left demonstrates how much more information is contained in a colour image than black and white.

Similarly, x-rays are also produced in a range of wavelengths called a spectrum. These different wavelengths are not visible to, or distinguished by, the human eye but they are able to be detected with film and digital devices. Standard radiographs use x-rays over a wide spectrum. They measure how much of the x-rays are attenuated by the object they pass through. Attenuation is a reduction in the total intensity of the x-rays as they pass through an object. They cannot measure how each different wavelength is being individually attenuated (this is equivalent to being able to measure the brightness but not the colour). The Medipix3 detector is able to measure how specific energies of x-rays are being attenuated. While these are outside of the range of wavelengths the human eye can see, they are ‘true colour.’

All materials attenuate the various wavelengths differently. This is because the atomic structure of materials is different. For example, on a regular x-ray image bone (predominantly calcium) highly attenuates the x-rays and appears white. Iodine, a common contrast agent, also highly attenuates the x-rays and appears white. However, across the spectrum the two materials are behaving very differently. Therefore during processing of the colour CT image, these two materials can be separated. The image below is of the same sample. In the colour image the back bone is green (calcium) and the stomach (filled with iodine contrast) is yellow. In the black and white image these two objects both appear white.

The Medipix3RX chip is the detector used in the MARS scanner. It is able to distinguish both density and atomic variation in a sample. The density determines the brightness of the image and the atomic structure (the fundamental materials of which the sample is made) determines the colour.

This leads to two possibilities: if the attenuation of a material is known then what would have previously been an unknown in an image can be determined. The attenuation of many things is known, such as calcium and iodine, so if these appear in an image they can be easily identified. If the image is comprised of all unknowns, then these unknowns can be separated out, despite not knowing what they are.

What is the Medipix detector?

The MARS scanner incorporates the Medipix3RX detector chip, a new generation x-ray detector. It is both energy resolving and photon counting which allows true quantitative images. It has been developed by the Medipix3 Collaboration, which comprises CERN in Geneva and 18 research institutions worldwide.

Spectral imaging offers to revolutionize the field of CT and provide a significant new technology platform for diagnostic imaging. MARS promises not only images with new and improved diagnostic information, but allows faster and lower cost radiology procedures while working with significantly lower radiation dose. This will significantly broaden both the value and use of CT as a diagnostic tool.

The MARS spectral molecular imaging technology is based on counting the number of photons at multiple narrow energy bands. This is often referred to as spectral, spectroscopic or multi-energy imaging. The Medipix3RX chip is made up of a specially fabricated CMOS semiconductor chip with a detector material bonded to it. Every pixel accurately counts the number of photons that reach it within specified energy bands. Black and white CT cannot distinguish different density tissue as they absorb similar amounts of photons. MARS advances this as body tissue of similar density interacts differently with certain energies. The Medipix chip can detect these different interactions. In addition the energy of a photon can change based on interactions with the electron shells of the atoms in the body tissues it encounters. These effects mean that information about both the density and the atomic make-up of a tissue can be imaged and can be assigned to colors on an image.